Ajax Robbed in the Champions League Against Chelsea 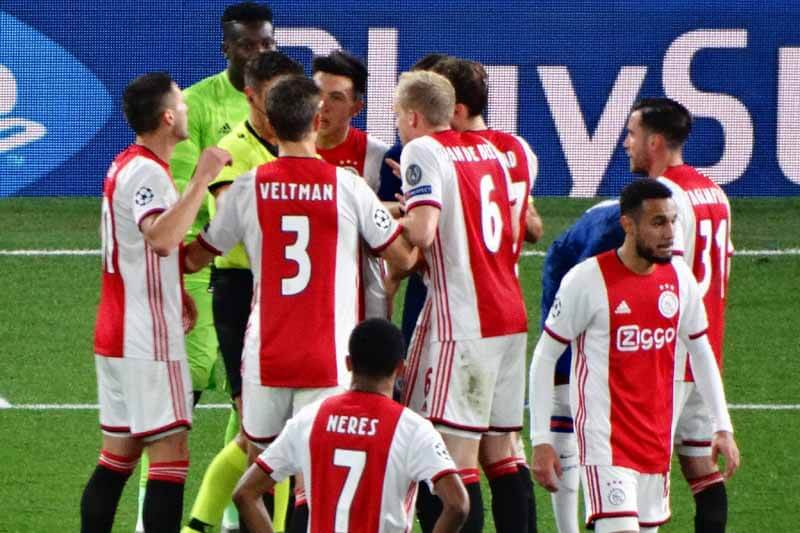 Confirmed what every football fan knew

What every football fan already knows, has finally been confirmed: Ajax has been robbed in the Champions League.

The vast majority of referees present at the UEFA ‘referee winter meeting’ on Mallorca, including referee Roberto Rosetti, agreed that referee blunders had cost Ajax victory against Chelsea (4-4), and thus continuation in the multi-million-dollar ball.

Erik ten Hag’s team ended the match with nine men. Italian referee, Gianluca Rocchi, should have stopped the game after the second yellow card for Daley Blind, according to the rules. This was the outcome of the discussion. Had the game been stopped, Ajax would have been spared a penalty and the red card for Joël Veltman with a 2-4 score. The VAR should have reversed those two decisions according to the arbitrators.

During the meeting on the Spanish island of Mallorca, to which dozens of international referees were invited, it was acknowledged that Gianluca Rocchi’s arbitral blunders caused Amsterdam to end up with a tie on 5 November 2019, during Chelsea vs Ajax (4-4, after a 1-4 score at half time). A victory in London would have meant that Erik ten Hag’s team could have continued in the Champions League.

Rocchi got Dudelange vs APOEL Nicosia in the Europa League and the game between Bayern Munich and Tottenham Hotspur, with nothing at stake. He is enjoying his referee’s retirement. That “Stamford Bridge’s shame” was revealed by Dutch newspaper Telegraaf, was obviously not UEFA’s intention.

It was a meeting behind closed doors on Monday 27, Tuesday 28 and Wednesday 29 January 2020, at the Melia Palma Bay resort, which is a four-star hotel, 350 metres from Ca’n Pere Antoni beach. But the conclusions when discussing the images of the Chelsea vs Ajax match, were that referee Rocchi had cost the Amsterdam players the victory and – as it turned out later in the month – a place in the eighth final of the Champions League.

Chelsea vs Ajax wasn’t the only Champions League game that was under scrutiny. A total of 150 clips with ‘incidents’ and ‘questionable (VAR) moments’ were discussed.

After the London game, which Ajax ended with nine men, Daley Blind already complained about Rocchi’s arbitrary mistakes. The Ajax player claimed that just before his second yellow (and therefore red) card a foul was made on him. “I looked back at the images: it seems clear to me that he (Christian Pulisic, ed.) touched me.”

On Mallorca, however, there was almost complete consensus that the Italian referee Rocchi was justified in continuing the game. And the foul that Blind then made, was, according to all those present, worthy of yellow. The red card for the experienced player – with a 2-4 score – was therefore completely justified.

However, the company in Melia Palma Bay was almost unanimous that the Italian should have stopped the game after Blind’s foul, because according to the rules of the game, advantage should only be given if there is a direct scoring chance. There was no direct scoring chance at 35 meters from the goal. This was also underlined on the Spanish island by European referee Roberto Rosetti.

Had Rocchi adhered to the rule book, Joël Veltman would have been spared a red card anyway. The defender’s hand had an unlucky run-in with the ball and was stunned to see how he got a penalty and received a second yellow card. This was also an incorrect decision, according to almost all Rocchi’s colleagues. The VAR should have intervened, according to Rosetti and most of the others present. The penalty and red card for Veltman should have been reversed.

In Palma de Mallorca it was finally confirmed what the Ajax fans already suspected, and the media wrote in November: that it was a case of robbery at Stamford Bridge. A letter from Ajax to UEFA with questions about the arbitration decisions was answered evasively. Thanks to Rocchi, the club has nothing to show for. Qualifying for the knockout phase of the Champions League would have meant Ajax earning 9.5 million euros, a victory over Chelsea instead of a draw another 1.8 million euros. Not to mention the skyrocketing market values of the players and the tens of millions that could have been, if Ajax had also made it to the quarterfinals, semi-finals or finals this spring.

It should be noted, however, that Ajax still had the opportunity to reach the last sixteen clubs in the Champions League due to a win at OSC Lille (0-2) against Valencia. As you know, Erik ten Hag’s team lost: 0-1. With only the less lucrative and less challenging Europa League left. To add insult to injury, the referees rubbed salt into the Amsterdam’s wound last week.

UEFA specifically refused to comment on the arbitration regarding Chelsea vs Ajax and the opinion of referee Rosetti and most of UEFA’s top referees present at the winter meeting was that the Italian Rocchi had seriously disadvantaged Ajax. The European Football Association responded with an email stating that “hundreds of video clips of incidents and situations from recent matches have been reviewed and discussed with all participants, as is customary with any referee training”.