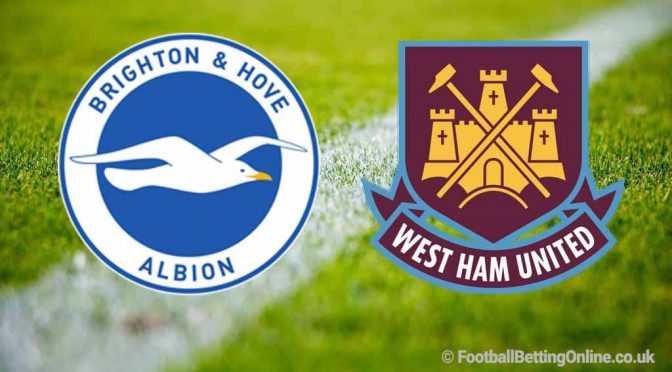 With the season coming to a close, West Ham United are in need of the 3 points here as they slipped down to 6th after Liverpool beat Manchester United. Brighton & Hove Albion are safe, but they will be disappointed to be anywhere near the drop with such a talented side.

There’s no doubt that Brighton & Hove Albion have quality among their side, but for whatever reason they haven’t shown what they’re truly capable of this season. They should be higher up the table, but survival was likely the main objective and now they have to build on this and improve next season.

They have a great manager in Graham Potter who has brought a lot of positives to the team, and the team itself has great talented players. Players like Adam Lallana and Danny Welbeck have played for much bigger clubs, but injuries have plagued their careers in recent seasons while the quality is still there.

Lewis Dunk is another player who has impressed along with Yves Bissouma who is expected to leave the club and sign for a top team after this season. Pressure should be off as there’s not much to play for, but the players will still want to end the season on a high with some good performances.

Brighton have been a side all season that play positive attacking football and they’re a tough side to beat, but results haven’t gone their way enough and that’s the disappointing thing. They could however spoil West Ham’s European hopes with a result here.

West Ham United disappointed last time out when they went down 1-0 to Everton at home, and they’ll have to bounce right back here with 3 points desperately needed. The Hammers’ moved down to 6th after Liverpool impressed against Manchester United, and with only 3 games to go, they’ll likely have to go unbeaten should they want to retain a European place.

or the club to even be 6th at this stage of the season is wonderful in itself and everyone at the club can be proud of their performance this season whatever happens. They deserve to finish in those European places after a remarkable campaign, but they’re moving in the wrong direction at the minute after losing 3 of their last 4 games.

It’s a crucial time with so few points remaining in the season, but West Ham should be right up for this one with a lot on the line for the club while not much for Brighton. That could potentially play a part here though as teams who don’t have much to play for tend to perform better without the pressure.

Having Michail Antonio back has been a welcomed sign for David Moyes as the striker has proven how important he is to the club this season. Jesse Lingard and Jared Bowen have been fantastic also, and they’ll be looking to be the creative output here.

There will be a lot of pressure on West Ham, but they have to forget about that and find a performance that warrants the 3 points as teams below are ready to take their spot.